The smartphone market has a variety of operating systems including Android, iOS, Blackberry, and Windows. The two that really outshine are Android and iOS and in this post, we will highlight some of the key differences between the platforms.

Since the release of the iPhone in 2007, and the release of the first Android device in 2008, the two have battled to create the best mobile experience for their users. The key difference between Apple’s iOS software and Google’s Android software is that Android is an open-source software while iOS is restricted to operate only on Apple devices. This difference has led to Android gaining tremendous market share relative to iOS, as it can be installed on a variety of handsets versus iOS only working on Apple devices.

Android holds an incredible 81% market share, more than four times the market share of all other operating systems combined. This incredible growth has been driven by its open-source design and allowing handset providers to use & customize the Android platform. iOS only has 14.8% percent market share.

While smartphone shipments have continued to increase for both Android and iOS, Android has rapidly increased volumes from 2013 to 2014 as a result of upcoming Asian smartphone makers such as Xiaomi, OnePlus, and Micromax. Furthermore, companies such as Samsung, HTC and LG have continued to develop large, powerful handsets that align with the needs of their target market. The graph below highlights smartphone shipments based on the operating system. 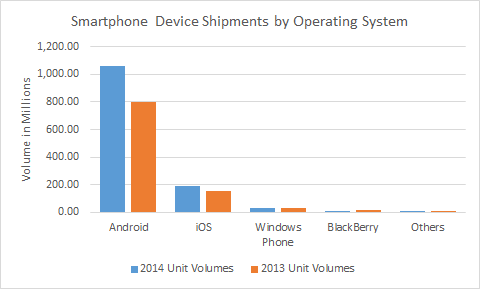 Apple and Google have taken very different approaches to both the design and functionality of their operating systems. Some key features and differences include:

What does this mean for your business?

Here at Gata Labs, we offer both our apps the Gata Driver App and the Gata Hub on Android and iOS devices. As the differences between these platforms are beginning to merge, it will be interesting to see how they can continue to create distinguished brands in the minds of consumers. After all, the importance of branding is something we strongly believe at Gata Labs. This is precisely why we allow each of our partners to create their own storefront on our app, and give them the power to build and leverage their own brand to attract customers.

Android and iOS both seem to have a cult-like following; it will be interesting to see how these changes affect their most loyal customers.